For as long as I can remember, we’ve celebrated the Mid-Autumn Festival each year with delicious foods, friends, family and most importantly, mooncakes galore! Mooncakes are intricate pastries filled with a red bean or lotus paste and often includes an egg yolk (not my personal preference, but I’m also an ABC, so what do I know).

This year, I came home for the weekend to spend time with mom, nai nai (grandma) and jo jo (uncle) and in a true east-meets-west weekend, we stopped by the Chinese bakery to get mooncakes on our way to the pumpkin patch to get our Halloween gourds. This is the new normal!

As a kid, I took it for granted that we always had mooncakes around during this time of year – either from relatives visiting from Taiwan or from friends in the area who would bring it as a gift. They were so plentiful, I would often get tired of them and leave some unfinished. I never really understood how much of a delicacy or special treat they were. This year, as I was buying a box of four mooncakes, I realized… these babies are pricey! Each of the mooncakes are $10+ and it’s not hard to see why. The pastry outer layer is thin, intricately designed and stays moist, while the inside paste exudes sweet but not overpowering flavor. Funny how your childhood memories can be re-framed so easily – what was once this dessert I took for granted is now something I seek and crave. I guess that’s called perspective! 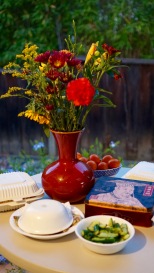